I’m visiting with family for the Thanksgiving holiday this week so will offer only a brief comment on Plus500. There are ample grounds for the observance this year after a truly remarkable 2015.

The FCA raised confidential, unspecified objections to Playtech’s proposed acquisition of Plus500. I do not know whether it was Playtech’s shareholders’ personal histories, its gambling business, its acquisition of Epsilon Finance, its connections to unlicensed trading firms, Plus500′s unlicensed activities, its ongoing regulatory issues, its business conduct, or the characteristics of the business itself that led the FCA to block the transaction.

In any case, who is allowed to operate Plus500 in Europe may shortly become irrelevant. As made clear by Playtech’s attempted expansion into financial products, highly leveraged CFD speculation is a tacitly acknowledged form of gambling. CFDs are not suitable as an investment product for the vast majority of retail investors. Under MiFID II regulations expected to take effect in 2017, European brokerages will be required to attest that complex financial products, including CFDs, are “appropriate” for clients. Guidelines remain in flux, but much of Plus500′s product offering as currently constructed appears designed for its activities in “unregulated” jurisdictions. How much revenue does Plus500 currently generate in regions where it operates without a license?

UK clients seeking to open a Plus500 account today are directed to Plus500′s Cyprus subsidiary, and it is unclear if Plus500 will ever again be allowed to onboard new clients under its FCA approval. Despite the change in control objection, the FCA has not historically shown itself to be a terribly toothsome regulator. I do not expect dramatic fines and regulatory sanctions of Plus500′s conduct, although the outright withdrawal of the FCA license remains a plausible outcome. However, the scandal of passporting the Cyprus authorization remains.

For the time being, I therefore assess Plus500 as a going concern. The company now proposes to repurchase shares and resume its dividend. Assuming completion of the full US$20 million buyback at today’s closing price of GBp 329, Plus500 would have approximately 110.9 million shares and GBp 45/share in cash. Added to this, the customer lifetime value approach described in Part 3 remains the only reasonable method of calculating the company’s franchise value. 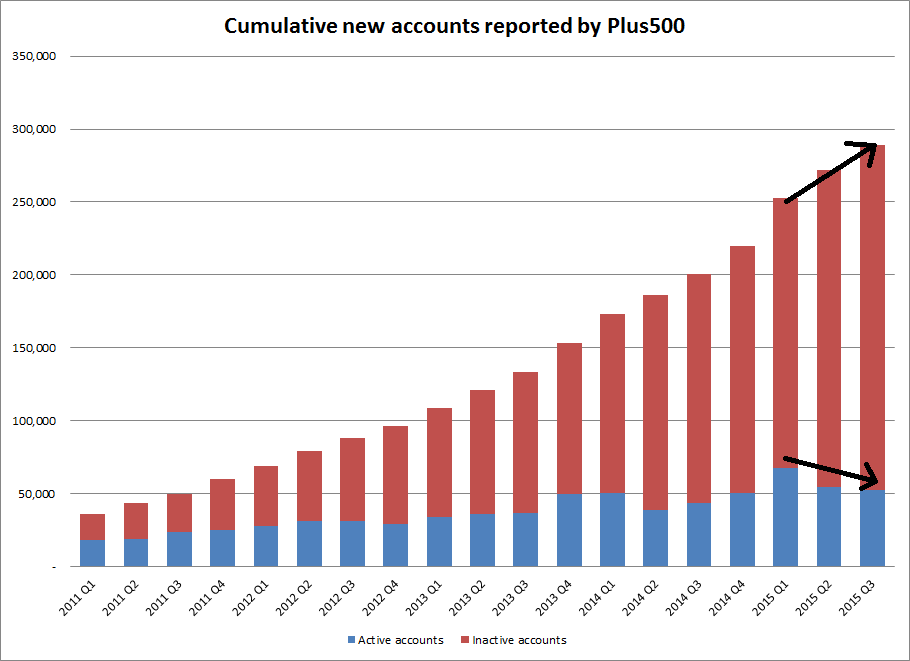 At 30 September, I estimate Plus500 had 103,146 “potentially active” accounts using the methodology described in Part 3, which will generate potential net income of no more than $83 million before churning, or GBp 50/share after buybacks under the assumptions described in the original report.

In other words, the market continues to place a significant premium on future customer acquisitions in 2017 and beyond, despite the major upcoming regulatory change in what is purportedly Plus500′s largest market. At current margins, the price is ~5x the value of the current customer base.

How much unsegregated cash does Plus500 actually have?

The company continues to have remarkably lax internal controls and financial reporting. Despite additional scrutiny of its financial statements, Plus500 has managed to reference three different cash balances (excluding customer funds) as of 30 June 2015. Does Plus500 properly segregate its customer funds? Which of the three mysteriously dwindling balances is correct?

The interim report put cash and equivalents at $95.533 million, so the third amount isn’t even a rounding error.

Finally, Plus500 still has yet to address the host of disclosure inconsistencies and misrepresentations documented in the original report and reiterated in Part 11. As I wrote there:

Notwithstanding PwC’s unqualified audit opinion, I question how the Board could possibly be comfortable with the 15 inconsistent disclosures identified in part 4, which have been forwarded to the FRC for review. Presumably, PwC did not also audit Geostrading, the mysterious Belize-based subsidiary the company has yet to acknowledge. Are the directors also comfortable with the historical operations of that entity? With respect to revenue generated from unlicensed jurisdictions, perhaps the Company could clarify how its purported European revenue in 2010-13 exceeded the gross revenue recorded at Plus500UK, the only licensed subsidiary at the time. Are any members of Plus500′s affiliate program related parties?

Failing to address material historical omissions and misstatements could perhaps be forgiven in the context of a pending acquisition and delisting.

Now that Plus500 intends to continue trading as a standalone public company, the Board of Directors and Nominated Adviser must meet their legal obligation to ensure that public disclosures accurately reflect the company’s true operations and financial position as soon as possible. I call on the company to respond directly to the outstanding questions raised in this series. Plus500 should immediately restate its disclosures and address its omissions regarding historical and ongoing unlicensed activity.