My wife and I recently returned from a visit to India over the holidays. The trip capped a very eventful year for Cable Car and left me in a reflective mood, despite the tumultuous start to 2016 in the markets. Although experiencing a different culture is invariably educational and I had the small thrill of trading from airport lounges on several continents, this was leisure travel. Due to regulatory restrictions, Cable Car is not able to invest in domestic Indian equities, and there are only a few US-listed ADRs available. We elected to watch the popular Bollywood film Bajirao Mastani in theaters rather than meeting with its controversial distributor, Eros International (no position).

At the risk of relying on what Amartya Sen termed an “exoticist” lens to understand India, I thought I’d share a serendipitous anecdote from the trip not entirely unrelated to investing.

On our second day in Chennai, which has a long coastline on the Bay of Bengal, we asked an auto-rickshaw driver to take us to the beach. The route passed through Besant Negar, a neighborhood that suffered significant damage during last month’s flooding and which I’m pleased to report has rebounded strongly. Many of the street vendors displaced by the floods had returned, and there was a hubbub of rebuilding activity. We arrived at the southern tip of Elliot’s Beach, in front of a large temple we hadn’t planned on visiting.

We had come unexpectedly to the Ashtalakshmi Temple, which is dedicated to the eight incarnations of Lakshmi, goddess of prosperity. The temple is open to all and was uncrowded, so we wandered inside. As we worked our way up the stairs, we passed shrines for each of the eight incarnations, each representing a different form of prosperity in turn. The Dhanya Lakshmi represents the bounty of a good harvest; the Vijaya Lakshmi symbolizes success in the face of adversity; the Vidya Lakshmi stands for the wealth of knowledge. At the very top of the temple, with panoramic views of the Bay to the east, sits the Dhana Lakshmi, bringer of money and gold. 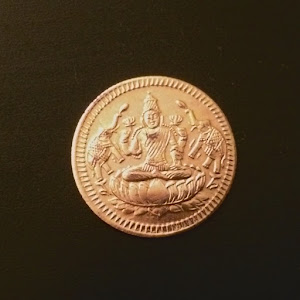 Hindu temples serve an important charitable function in the local community, collecting funds for the temple itself as well as alms for the poor. At each shrine, a priest sought a small donation, but the Dhana Lakshmi’s pandit was different. In keeping with Dhana Lakshmi’s association with money, he had a uniquely convincing pitch. In asking for the donation, the pandit stated that it was not to be viewed as a gift, but as an investment. What you give to the goddess, you shall receive many times over in return. I think the analogy to investing is quite apt. We gave generously, and soon found ourselves garlanded in flowers and given a small coin as a token of good fortune.

I am not a particularly superstitious or religious person, but I am quite fond of ritual and spirituality. A more cynical type might not have enjoyed the experience, but from my perspective, a shrine on a beautiful beach in Tamil Nadu is as good an avatar of good fortune as any.

Visiting the Ashtalakshmi temple left me contemplating the role of luck in investing. As I look back over a very successful year for Cable Car, I am keenly aware of the importance of luck. 2015 felt at times like a constant parade of potential pitfalls—whole sectors moving suddenly out of favor, precipitous repricing of currencies and commodities, comedowns by investors others look up to—to have avoided some of the year’s worst outcomes was the just reward for healthy skepticism, but in other instances it was a mere case of (not) being in the right place at the right time. Investing provides constant reminders that there are many factors influencing each investment that cannot be hedged and are totally outside an investor’s control.

However, I am firmly of the belief that for investors, the saying “You make your own luck” is a truism. Not by donating to Hindu shrines, although perhaps that will help in some small way, but by creating a universe of attractive potential outcomes. We are fortunate in the investing business to be given the opportunity to specify our preferred probability distribution. The task of portfolio construction is the luxury of assembling a collection of only those investments where research suggests the odds are favorable. I approach investing by trying to minimize the consequences of mistakes and misfortune, while maximizing the likelihood of good luck.

Yet ultimately we cannot control outcomes, only the research process, and the best investors will retain their focus on research irrespective of the market’s gyrations. I’m not immune to Schadenfreude, but I do not enjoy seeing famous investors in the headlines for a tough year. There but for the grace of Lakshmi, perhaps, go I. It is far too soon to count out some of the boldface names who had a difficult go of it in 2015.

Often, I feel that the timing of returns is the most significant element of randomness. When taking the view that the market has mispriced a security, it is difficult to predict when and if that will change. We can try to influence market perceptions and corporate actions through activism, but there is an element of uncertainty to every investment. Returns are path dependent—the opportunity to redeploy capital from a positive outcome can be a powerful contributor to future performance. I consider myself fortunate both when the market agrees with my positioning and when volatility provides an opportunity to adjust exposures.

Just as it can feel like a stroke of luck to have avoided pitfalls in the marketplace, it can feel like a blessing to be able to obtain borrow on an obviously overvalued stock, or to be unable to obtain it on a stock that later squeezes higher. I have had occasions to be fortunate to be at my desk during breaking news, and fortunate to be away during moments when others have acted rashly.

Most of all, I feel fortunate to be entrusted by my clients with their capital in a role that I love. Whatever your personal Dhana Lakshmi, I wish you good fortune and many happy returns in the year ahead!