If Plus500 continues as a going concern, it still deserves a low multiple. But there is a bull case.

As should be clear from the previous post, a brokerage business that ultimately captures most customer deposits as revenue has the potential to be stupendously profitable. Indeed, the reported financials look almost too good to be true. Plus500 should be a value investor’s dream: on minimal upfront capital investment, cash generation appears robust. Revenue has doubled two years in a row. EBITDA margins are over 60%. After this week’s decline, shares trade at little more than 4x last year’s earnings. The company has historically paid a significant dividend. There is just one small wrinkle:

Customers run out of money.

As has been discussed elsewhere, Plus500 has very high churn rates. This should be unsurprising given the dynamics of a bucket shop. Revenue growth is attributable to an aggressive customer acquisition and affiliate marketing scheme that pays affiliates one-time bonuses up to $600 per account or ongoing revenue sharing up to 30%. I believe most customers eventually lose their investment, and that the company’s growth will therefore prove unsustainable. To see this, consider the two key KPIs Plus500 publishes each quarter: the number of ‘new accounts,’ defined as a customer who deposits money for the first time, and the number of ‘active accounts,’ defined as a customer who made at least one trade during the period. A different visualization of the data makes clear that customers eventually roll off: 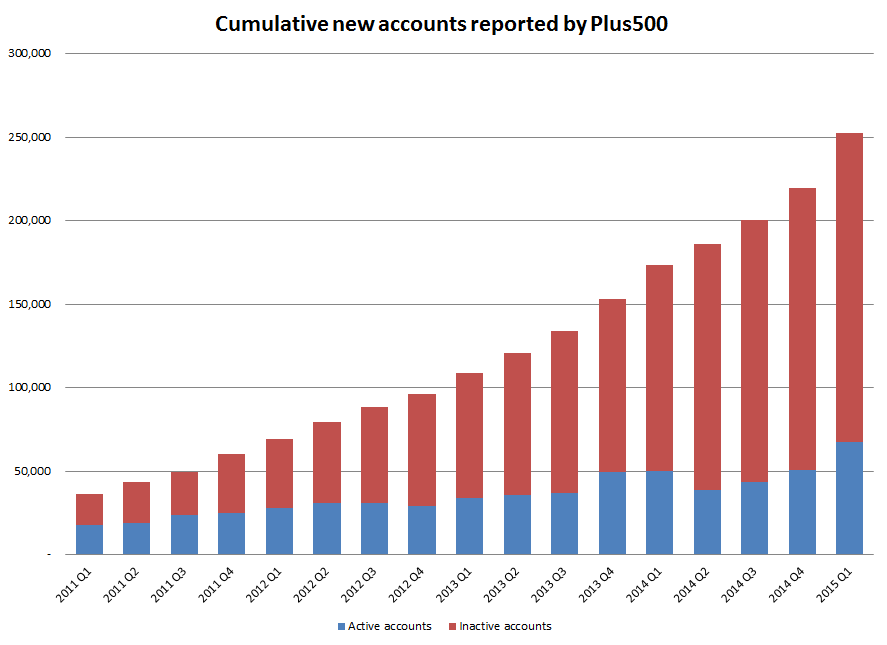 Using the 26,570 customers active in 2010 (Admission Document p.17) as a starting point, the cumulative number of new accounts reported has risen to 252,748 as of last report. However, the proportion of accounts active each quarter has steadily declined as customers depart. A small portion of previously active accounts have returned in times of significant market volatility, but to date the number of inactive customers, previously reported as new, has increased every single quarter.

Indeed, in the Admission Document, Plus500 admits that customers have a finite lifetime. As of July 2013, “The Directors currently estimate that on average a customer remains an Active Customer for a period of 15 months and generates $1,700 in revenue for the Group” (p.23). Note that such a short customer lifetime is more characteristic of an online gambling operation than a reputable brokerage. The $1700 figure is consistent with 2013 reported ARPU of $1325 (15/12 x $1325 = $1656). The company’s investor relations representative now claims an average customer stays for 18 months, although the customer activity data suggest 15 months is closer to the right figure. Based on 2014 ARPU, an 18-month lifespan would imply a potential lifetime value of up to $3240.

Among the 252,748 cumulative accounts to date, including 185,081 inactive in Q1, approximately 99,435 are less than 18 months old, and therefore might yet still have capital available to trade. From this, we can calculate a going concern valuation of the business.

What is Plus500 worth as a going concern?

Instead of capitalizing earnings at an arbitrary multiple, it makes more sense to think about the lifetime value of the current customer base, in order to back into what the market is paying for potential future customers. Taking the company at its word and assuming the remaining 99,435 potentially active customers have a weighted average remaining life of 10 months (computed on the number of new accounts reported in each of the last 5 quarters), they could each be expected to generate just under $1800 in additional revenue based on 2014 ARPU, for a total of $178.4 million. Assuming a 15-month lifespan, future revenue would drop to $124.7 million. This is one-time, non-recurring turnover that should not be capitalized. Future growth depends on attracting new customers to the platform.

Using the company’s 2014 net margin of 44.8% (which fairly accounts for operating expenses and ongoing advertising and revenue sharing—not all user acquisition cost is upfront), this gives a range of $55.8-79.8 million in value that the current customer base can be expected to generate for Plus500. I won’t even bother discounting it. Added to stated cash balances of $88 million, the remaining value of Plus500′s ongoing operations is GBP 1.25-1.46 per share, plus the value extracted from any future customers acquired.

In other words, even after this week’s decline and any reputational damage from the account freeze, the market is ascribing about $300 million in present value to Plus500′s future customer acquisition efforts, roughly an additional 200,000-250,000 new customers using the same approach as before.

In my opinion, if regulators carefully review the reporting inconsistencies highlighted in Part 4, neither the monetization of the current customer base nor the acquisition of new customers should take place.

Supporters of Plus500, in addition to making the obvious peer-group comparisons to CFD brokers with different, more sustainable business models, have very effectively countered a strawman short thesis. Zack Buckley of Buckley Capital Partners distributed a widely circulated long pitch on Plus500 last year that effectively sums up the bull case. In it, he expresses trust in the company’s management, while expressing skepticism that “a fraud” could pay dividends, be audited by PricewaterhouseCoopers (PwC), and have substantial insider ownership. I recommend reading the report and hope for Zack’s sake that he no longer holds a position in the company.

I am not aware of anyone whose short thesis on Plus500 has been based on the assumption that the May 15 dividend was not actually paid, as suggested by the company. There is an important distinction between the type of outright financial statement misrepresentation common among some of the more egregious Chinese reverse merger scams in recent years, and other forms of major business fraud. Whether the financial statements fairly and accurately represent a company’s financial position and whether a business is truly everything it claims to be are very distinct questions. For example, a CFD brokerage designed to capture customer deposits as revenue will generate real and substantial cash flow, while perhaps representing itself as being more reputable and customer-friendly.

Enron and Worldcom both paid regular dividends. The founders of Plus500 have cashed out to the tune of approximately GBP 164 million ($254 million) from dividends and share sales in the IPO and follow-on offering. Alon Gonen is already a very wealthy man.

PwC is a reputable audit firm. In Part 5 I will discuss why there could still be issues with the financial statements.

On to Part 4: Inconsistencies in Plus500′s public filings –>

6 thoughts on “Your Capital at Risk Part 3: Customer Lifetime Value”