Plus500 makes inconsistent claims about the basic details of its business. It will be a bit tedious to run through them all, but it should give investors pause that even simple facts like the number of CFDs offered on the platform are not consistently represented.

Public and private companies in the United Kingdom are required to file annual accounts, which are publicly accessible from a government website called Companies House. Plus500′s UK subsidiary, Plus500UK Ltd, company number 07024970, has filings available since its 2009 inception. Unlike EDGAR, downloading each document costs 1 GBP, so to save you a few quid I’ve uploaded the key documents:

Similar filings for the Cyprus and Australia subsidiaries are also available, but they are generally not material to the Group. For reference:

For comparison purposes, I reference Plus500′s published annual and interim reports, the company’s website, and the 17 July 2013 Admission Document (akin to an S-1).

Starting with the basics, the UK subsidiary filings contain a number of simple statements about the business that do not match Plus500′s marketing materials or contemporaneous filings. Again, I don’t want to levy accusations—these are publicly verifiable discrepancies, but I have no idea whether they reflect mere sloppy drafting, poor internal controls, or deliberate fabrications. The following list of misstatements in one place or another is in chronological order, not order of significance. Some differences are a lot more bothersome than others, and I’m sure I’ve missed a few:

Why is the 2013 restatement such a big deal?

Most obviously, if the restated Plus500UK revenues cannot be accounted for elsewhere in the Group, the $115.1 million of revenues reported in 2013 is overstated by the difference of approximately $79.8 million and the Group financial statements cannot be relied upon. Alternatively, if the revenue discrepancy is due to additional trading activity outside of the regulated UK subsidiary, then Plus500 may have understated the degree of its unregulated activity in unlicensed jurisdictions. This would be problematic because the Cyprus license was not granted until 2014 and the Australian subsidiary reported only AUD 3.3 million of revenue in 2013, meaning as much as 80% of the company’s revenues would have been generated without a license.

If the Plus500UK inter-company agreement remains in effect, the company’s explanation that Plus500UK revenues were simply reclassified from Plus500UK to the Parent is nonsensical. The agreement calls for 78% of dealing spread revenue to be paid to the Parent as compensation for the back-end and referral services they provide. If the missing revenues were in fact generated in the UK, they would have been paid over to the Parent anyway under the agreement. In the unlikely event the agreement were no longer in effect in 2013, the same year it was disclosed in the Admission Document, then the Company is extremely tardy in updating the market. In any case, the magnitude of the restatement (GBP 51.0 million, 80% of the 2013 revenue originally reported) is much more than the amounts that would have been payable under the inter-company agreement. Spreads were about 74% of revenues in 2013 according to a company presentation, so I estimate the inter-company agreement should have required Plus500UK to pay the parent approximately 74% x 63.8 million x 78% or about GBP 36.8 million based on the 63.8 million in revenue originally reported.

Moreover, the 2014 Companies House filing includes costs to the subsidiary of GBP 3.3 and 5.0 million in 2013 and 2014 for “introductory commission” which “relates to platform provision and intermediation services provided by Plus500 Ltd.” (note 10). These amounts are significantly less than would be expected under the inter-company agreement. The restated Plus500UK revenue for 2013 was 12.8 million. Applying the same math as before, the 2013 payment should have been 74% x 12.8 million x 78% or about GBP 7.4 million. Based on the 2014 spread proportion of revenue of 87%, the expected payment for “introductory commission” under the agreement in 2014 should have been about GBP 27.1 million. The discrepancy suggests that spread revenue may be a lower proportion than claimed, as hypothesized in Part 2. 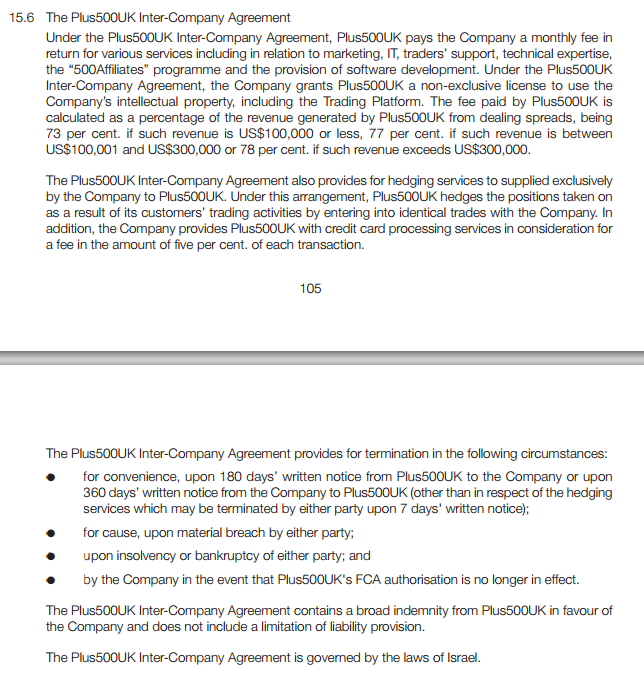 A more charitable explanation of the revenue shortfall is that Plus500 was reporting gross instead of net revenues for the UK subsidiary, as summarized in the IFRS transition note below (2014 Companies House filing note 21):

According to PWC, the originally reported GBP 63.8 million of turnover included 18.7 million of improperly recognized cost of sales and e-money charges. The remaining 45.1 million in net revenue was further reduced by 32.3 million of “introductory commission,” which would appear to be amounts remitted to the Parent under the inter-company agreement. It is unclear why a portion of the “introductory commission” (the 3.3 million discussed above) would be reported as a separate cost item, or why amounts payable under the inter-company agreement would be recorded as a contra item to turnover.

Like the 2014 subsidiary accounts, the Group accounts are also prepared under IFRS and do not include any cost of sales item. In other words, the $115.8 million of Group revenues in 2013 should be a net figure. Even assuming the introductory commissions were earned and paid to the Parent, that still leaves GBP 18.7 million (about $29.2 million) of revenue previously reported at the UK subsidiary unaccounted for at the Group level.

If all this sounds complicated, it’s because it is. I have a few speculative theories to explain what’s going on behind the scenes, but these are questions the company should really clarify in its filings. If Plus500 has not fabricated revenues, I suspect the company may be generating substantially more of its profitability from either or both of 1) trades in unlicensed jurisdictions or 2) customer losses, than it has disclosed to the market.

Additional trading in unlicensed jurisdictions would explain the large gap between net revenues at Plus500UK and net revenues at the Group level in periods where Plus500UK was the primary regulated entity. Note the “hedging services” provision in the inter-company agreement. Booking offsetting trades in the Plus500UK subsidiary would allow profits from customer losses to be disguised as inter-company transactions, while allowing the company to claim that customer positions represent a very small proportion of subsidiary revenues.